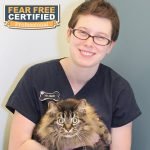 “Morgie”, as so frequently called by co-workers, enjoys spending time with family and friends, as well as catching up on all the latest movies. She also enjoys being technologically savvy, and has become the resident “Computer Doctor” for the hospital.

Morgan is owned by her very eccentric cat, Viper Striper, whom she adopted from the Weare Animal Hospital. In her spare time, she likes to perform stand-up and keep everyone she meets laughing!