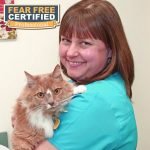 In 2010 Lisa came back to the animal hospital and was delighted to be grooming part-time again. In 2015 the Weare Animal Hospital extended her hours and she now grooms 5 days a week, with weekend hours. Lisa loves her job and prides herself on grooming all breeds of dogs, and specializes in cats.

Lisa lives in Weare with her husband, 2 children. She is owned by two cute cats, Butterball and Jet. In her spare time she is very dedicated to her children’s after-school activities, using the local gym in Weare and spending quality time with her family.