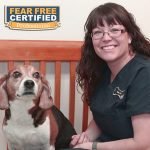 Audra has been working at the Weare Animal Hospital since 1993 and, other than Dr. Dutton, she has been employed at the hospital the longest. Because of this, Audra has enjoyed the privilege of watching many patients grow from puppies to seniors in the years that she has been here. She is a Certified Veterinary Technician, enjoying the challenges and rewards of her career.

Audra lives for a good foreign body surgery or a caesarean section. She thrives under the pressures of emergency situations. Always on the ball, she is basically the Captain of the Ship or, at the very least, the First Mate.

Audra started showing dogs when she was eight years old. She has extensive knowledge of breeding, showing, and training dogs as she bred Australian Shepherds growing up.

Audra lives in Webster with her husband and two children. She is owned by a yellow labrador Bella Bean, two cats Ollie and Parker, and an abundance of fish. Bella Bean and Ollie were both rescued by the Weare Animal Hospital. In her spare time she enjoys reading, cooking, and spending time up at camp in Northern New Hampshire with her family.